In this article, we going to the understanding of microservices. If you want to understand the architecture of Microservices then you can check out

Unfortunately, there is no widely agreed definition of the word microservice. The following definition would be used in the context of this course:

For eg, an e-commerce system can be divided into modules to:

This speeds up deployment and reduces the amount of checks required, since only one module has to be deployed. Due to this higher degree of decoupling, a big project will transform into a variety of smaller projects. Each project is under the responsibility of an individual microservice.

Advantages of this microservice definition

Defining microservices as individually deployable modules has many advantages:

Deployment of a monolith application

Size of a microservice

The definition of microservices described above does not tell much about the size of a microservice. The word microservice, of course, implies that limited resources, in particular, are meant. In reality, however, microservices can differ tremendously in size. Such microservices keep the whole team occupied, while others only have a few hundred lines of code. Thus, the scale of the microservices is not sufficient to be part of the description.

One reason for the use of microservices is the easy scalability of development. Wide teams also need to work together on challenging tasks. With the help of microservices, the projects can be divided into smaller units that can work independently of each other.

Thus, with the aid of microservices, teams will operate independently in the field of logic and technology. This minimizes the teamwork commitment required for major programs.

Maintaining the legacy structure is also a problem since:

But then the microservices are very much like a greenfield project. No preexisting codebase has to be used. In addition, developers can employ a completely different technology stack. This immensely facilitates work compared to having to modify the legacy code itself.

Microservice-based architectures promise that systems remain maintainable even in the long run.

Dependencies have to be managed

To achieve maintainability, the dependencies between the microservices have to be managed in the long term.

In the microservices architecture

Let’s discuss each phase shown above.

Deployment must be automated

However, note that microservice architectures can only work when the deployment is automated! Microservices substantially increase the number of deployable units compared to a deployment monolith. This is only feasible when the deployment processes are automated.
Independent deployment means that the continuous delivery pipelines have to be completely independent. Integration tests conflict with this independence. They introduce dependencies between the continuous delivery pipelines of the individual microservices. Therefore, integration tests must be reduced to the minimum. Depending on the type of communication, there are different approaches to achieve this for synchronous and asynchronous communication.

Most of the time, scaling the whole system is not required. For example, for a shop system during Christmas, the catalog might be the most critical and hardware-consuming part. By scaling the complete system, the hardware is spent on parts that don’t require more power.
Each microservice can be independently scaled. It is possible to start additional instances of a microservice and distribute the load of the microservice into the instances. This can improve the scalability of a system significantly.
So, in the previous example, just the catalog would need to be scaled up. For this to work, the microservices naturally have to fulfill certain requirements. For example, they must be stateless. Otherwise, requests of a specific client cannot be transferred to another instance, because this instance than would not have the state-specific to that client.
It can be difficult to start more instances of a deployment monolith due to the required hardware. Besides, building up an environment for a deployment monolith can be complex. This can require additional services or a complex infrastructure with databases and additional software components. In the case of a microservice, the scaling can be more fine-grained so that normally fewer additional services are necessary and the basic requirements are less complex.

Microservices can be isolated from each other.

In the end, many advantages of microservices can be traced back to a stronger isolation.

Which of the discussed reasons for switching to microservices is the most important depends on the individual scenario. The use of microservices in a greenfield system is the one exception.
More often, a deployment monolith is replaced by a microservice system (see chapter 4). In that case, different advantages are relevant.

The scaling of development is not the only scenario for a migration. For example, when a single Scrum team wants to implement a system with microservices, scaling development would not be a sensible reason since the organization of development is not large enough for this. However, other reasons are possible. Continuous delivery, technical reasons like robustness, independent scaling, free technology choice, or sustainable development all play a role in such a scenario.

In the end, it is important to focus on increasing the business value. Depending on the scenario, an advantage in one of the previously mentioned areas might make the company more profitable or competitive, for example, faster time to market or better reliability of the system.

Depending on the aims, a team can compromise when implementing microservices.

The technical and organizational advantages point to two levels at which a system can be divided into microservices.

The drawing above shows an example for the two levels. Based on the domains, an e-commerce application is divided into the microservices:

Search is further subdivided. The full-text search is separated from the category-based search.

Typical numbers of microservices in a system

It is difficult to state a typical number of microservices per system. Based on the divisions discussed in this chapter, 10-20 coarse-grained domains are usually defined, and each of these might be subdivided into one to three microservices. However, there are also systems with far more microservices.

Must Be Independently Deployable

Testing must be independent

Microservices communicate through the network. Compared to local communication

A microservices system cannot rely on the availability of other microservices. This makes the systems more complex.

The most important rule is that microservices should only be used if they represent the simplest solution in a certain scenario.
The previously mentioned benefits should outweigh disadvantages resulting from the higher level of complexity for deployment and operation. Choosing a more complex solution is rarely a good idea.

Microservices represent an extreme type of modularization. Their separate deployment is the foundation for a very strong degree of decoupling. This results in numerous advantages.

A crucial benefit is isolation at different levels.

Some FAQ on Microservices

What is meant by Microservices?

What are Microservices used for?

Microservices are increasingly used in the emerging world as developers work to build bigger, more dynamic systems that are best designed and operated as a mix of smaller services that work together coherently for more comprehensive, application-wide features.

What are examples of Microservices?

Is REST API a Microservice?

No both are different in nature. It can be SOAP or rest also, Microservices are well define SOA.

What are Independent Systems Architecture concepts? 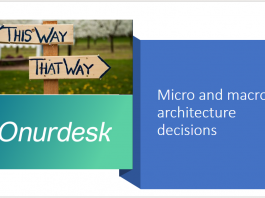